As Old Glory flew proudly throughout the Memorial Day weekend as our nation remembers our fallen hero's, we honor them for their contribution for freedom. Memorial Day, formerly known as Decoration Day originated after the American Civil War to commemorate the Union and Confederate soldiers who died in the War. By the 20th century, Memorial Day had been extended to honor all Americans who have died while in the military service and what greater way to honor our WOUNDED WARRIORS than hold an event on MEMORIAL DAY WEEK-END.

"My first chance to help work with the "Wounded Warriors" came when life long friend, Mitch Morgan,(also a Vietnam Veteran) and I were asked to volunteer our chuckwagon cooking in San Antonio, Texas" states Steve. This was to help feed the Wounded Warriors at Fort Sam Houston, through the U. S. Army Medical Command. The program called "Cowboys for Warriors" was set up by Arb Lenamon, who is a member of the (ACWA) American Chuck Wagon Association and also a chuck wagon cook from Victoria, Texas. The western day-long event provided food, cowboy entertainment and music for the many wounded service members of the Armed Forces and their families. What a humbling experience," stated Steve Hull. He further went on to explain, "We can never do enough to support or pay back the debt we owe to our Military personnel who make whole sacrifices defending our freedoms. This is when the idea of holding an event in Missouri came to mind." 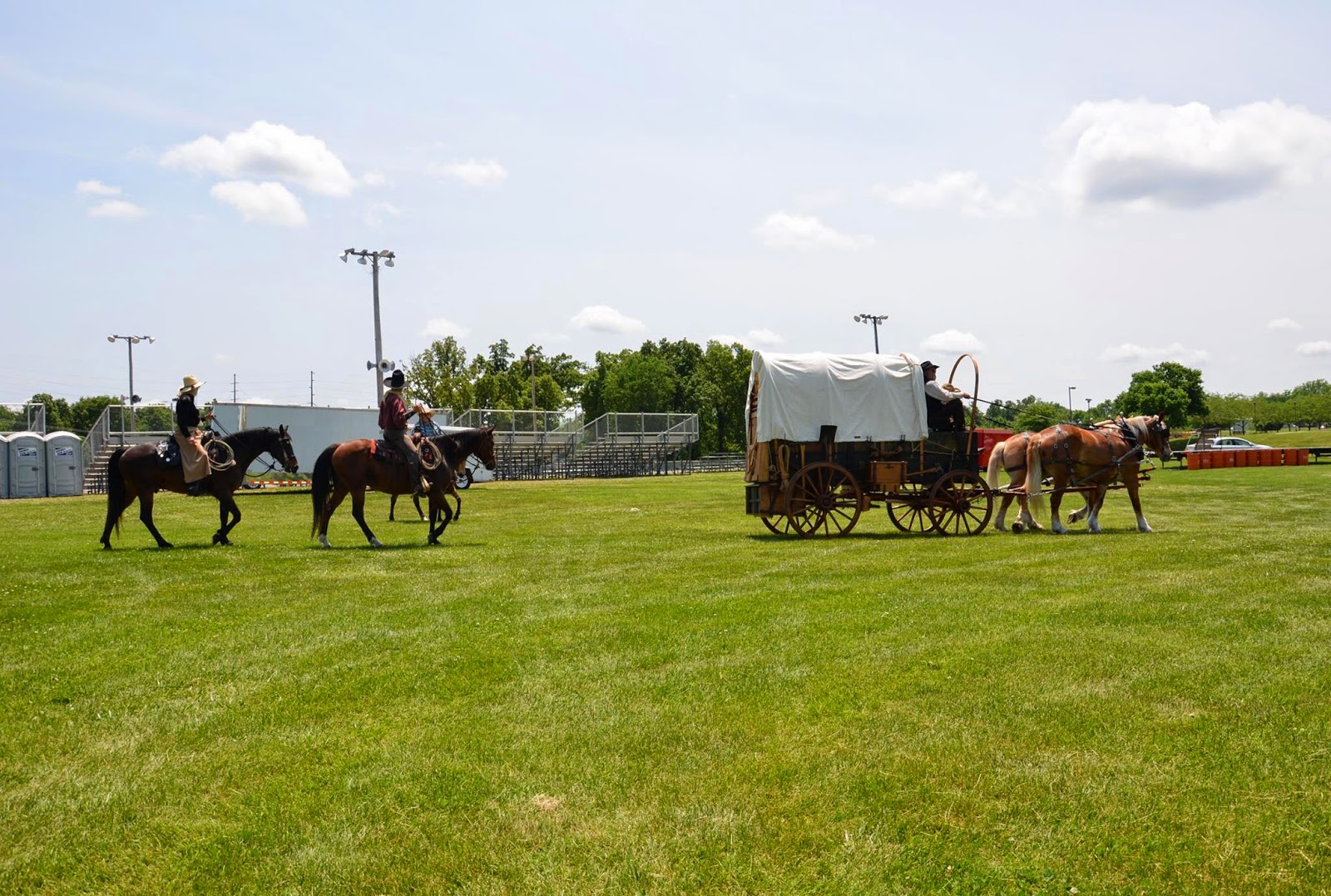 Fred Bloch of the Windover Ranch drove his chuck wagon team into Lebanon, Missouri in grand style. In case the natives got restless, his wagon team included outriders bringing up the rear. Fred's chuck wagon joined 12 others at the Kenneth E. Cowan Civic Center Friday afternoon, setting up for the fourth annual Wagons For Warriors event held over the 2014 memorial day weekend.

Thirteen authentic chuck wagons from five different states rolled into Lebanon, Missouri rustling up vittles for a crowd of nearly 2,000 all to benefit Mid Missouri Chapter of the Association of the United States Army (AUSA) Fort Leonard Wood Wounded Warrior Fund. Last year, Wagons For Warriors was able to donate nearly $10,000 to the fund and the event's main sponsors are the Lebanon Area Chamber of Commerce and the Friends of the Fort.

Each chuckwagon team prepare special entrees to go along with the traditional cowboy flare of beans, potatoes, bread and cobblers. Wood burning fires filled the air with an aroma of true cowboy cooking as cooks work special dishes cooking of cast iron skillets and dutch ovens. Just before noon, each chuckwagon camp had sizzle up the savoring meals for a hungry crowd. Tickets were sold for the meal at $10 each

The event was ready to tackle what ever kind of weather was thrown their way including early morning rain. The chuckwagon cooks began preparing the days meal starting at 5:30 a.m. Saturday morning. Entertainment kicked off by 10 a.m., and lunch was served to the hungry crowd starting at 11:30 a.m. Patrons don their cowboy hats and boots as families and military veterans got into the spirit of the event.

On the menu at the various wagons was chuck wagon style dishes, tablitas, fajitas, chicken-fried steak, beef and home-made noodles, smothered steak and even hot dogs for the younger buckaroos who prefer more modern fare. There was also succotash, beef tips and rice.

Randy "Big Boy" Dyer traveled from Clay City, Indiana to be part of the Memorial Day weekend event. He purchased the wagon from the granddaughter of it's original owners. Adding the chuck box, Randy fully restored the Huntingburg wagon converting it into a working chuckwagon. Competing in Texas, Georgia, Minnesota, Tennessee and performing many demonstrations across the nation, Randy stated this is his favorite event, working the annual "wagon for Warriors" benefit. Randy, also is a Vietnam veteran, who understands the importance an appreciates the opportunity to help support those who serve our nation.
Rick Smith, a retired Texas Department of Public Safety Officer and today owner of the Double R Reindeer Ranch in Midlothian, Texas traveled to Lebanon joining chuckwagon partner, Major General Tod Bunting, from Kansas who was the Adjutant General of Kansas retiring in 2011 and currently the CEO at Center for American Values.

Out Yonder Wagon owned by Gary Pool from Weatherford, Texas was sponsored locally by Shadel's Colonial Chapel of Lebanon. Gary was assisted by Vicky Raymond working off the original 1870's Bain manufactured wagon.

Deep Fork Cattle Company chuck wagon from Chandler, Oklahoma was sponsored by Shianne's Truck Repair. Owners David and Sheryl Roberts restored the late 1800's Newton manufactured wagon and provide Cowboy Christian Ministries when not assisting in events such as the Wagon for Warriors.
Buster and Diane McSparran of the Goode Ranch chuckwagon, from Hamilton, Texas was sponsored locally by Missouri Eagle.

Traveling from deep south Texas was the ELLIS CATTLE COMPANY, owned by Charlie and Janice Ellis
of Papalote, Texas. Charlie's wagon is a converted turn of the century 1900 John Deere Wagon. His wagon also has a front storage in addition to the the chuck box and boot that folds down for easy access.
Dennis and Donna Williams from Neosho, Missouri own and operate the Circle Double D Chuckwagon which they restored from a 1900 Springfield manufactured farm wagon. They often perform catering creating an authentic cowboy atmosphere with their chuckwagon and have traveled throughout the mid-west, Texas, South Dakota, Wisconsin and Illinois providing traditional cowboy meals while exhibiting the wild west and cow camps of the cattle drive era.

Todd Lowrance and Ed Kapelski, took some time to relax under a shelter at the J.L. Cattle Company's chuck wagon, sponsored by Independent Stave Co. The chuck wagon is owned and operated by Jeff and Liz Jenkins of Lebanon. Jeff purchased the Studebaker wagon last year as it sat as a pile of rubbish. Replacing every rotted board and reusing the hardware, Jeff brought the wagon back to life and in mint
condition. His wagon recently won best wagon during a chuckwagon cooking competition held in Pigeon Forge, Tennessee last February.

Event planner and host, Steve Hull with Mitch Morgan of the "Still Hangin" chuckwagon team also cooked from their restored wagon built in the late 1800's by (BMC) Brown Manufacturing Corporation. BMC was formed in 1879 constructing plows and other agricultural farm implements in Zanesville, Ohio.

At the end of the exhausting day, wagon teams began cleaning up and packing their gear away. Each proud to say they took part making their contribution by volunteering for the Memorial Day weekend event that raised funds to support many local military members who had been injured in the line of duty. For information about supporting the Wagon for Warriors, contact Steve Hull at stillhangin1@gmail.com or visit his web site at http://www.stillhangin.com/ 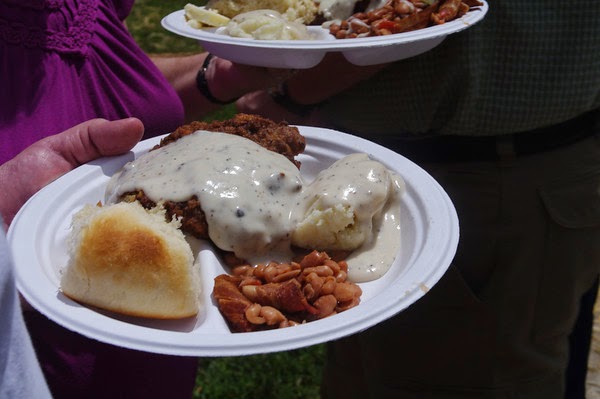 Posted by cowboysandchuckwagoncooking at May 27, 2014 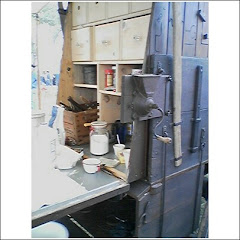 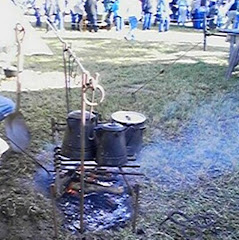 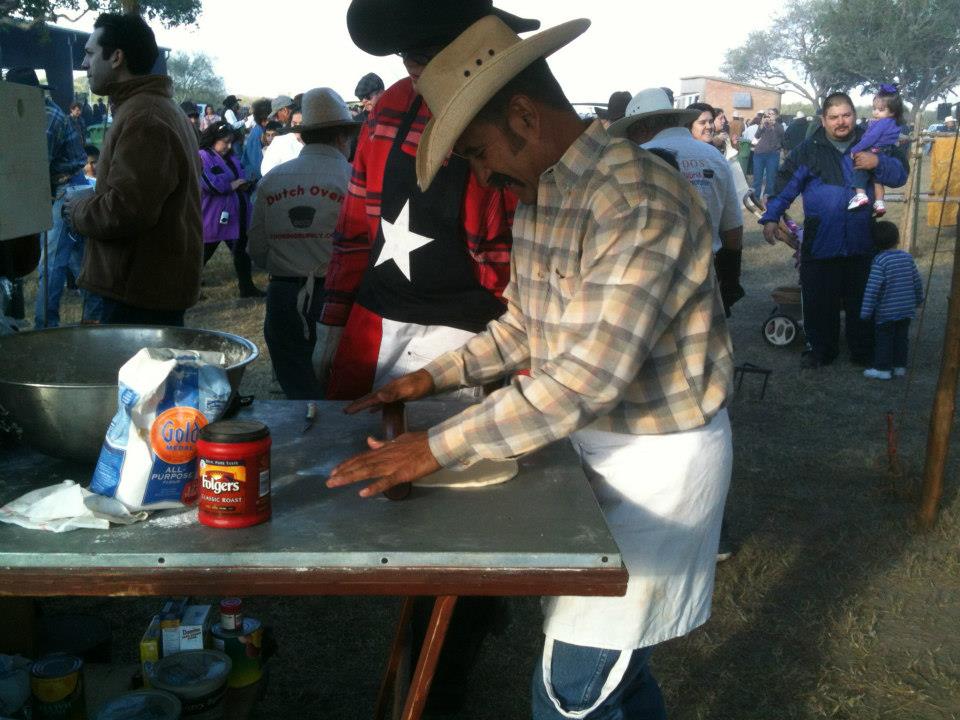 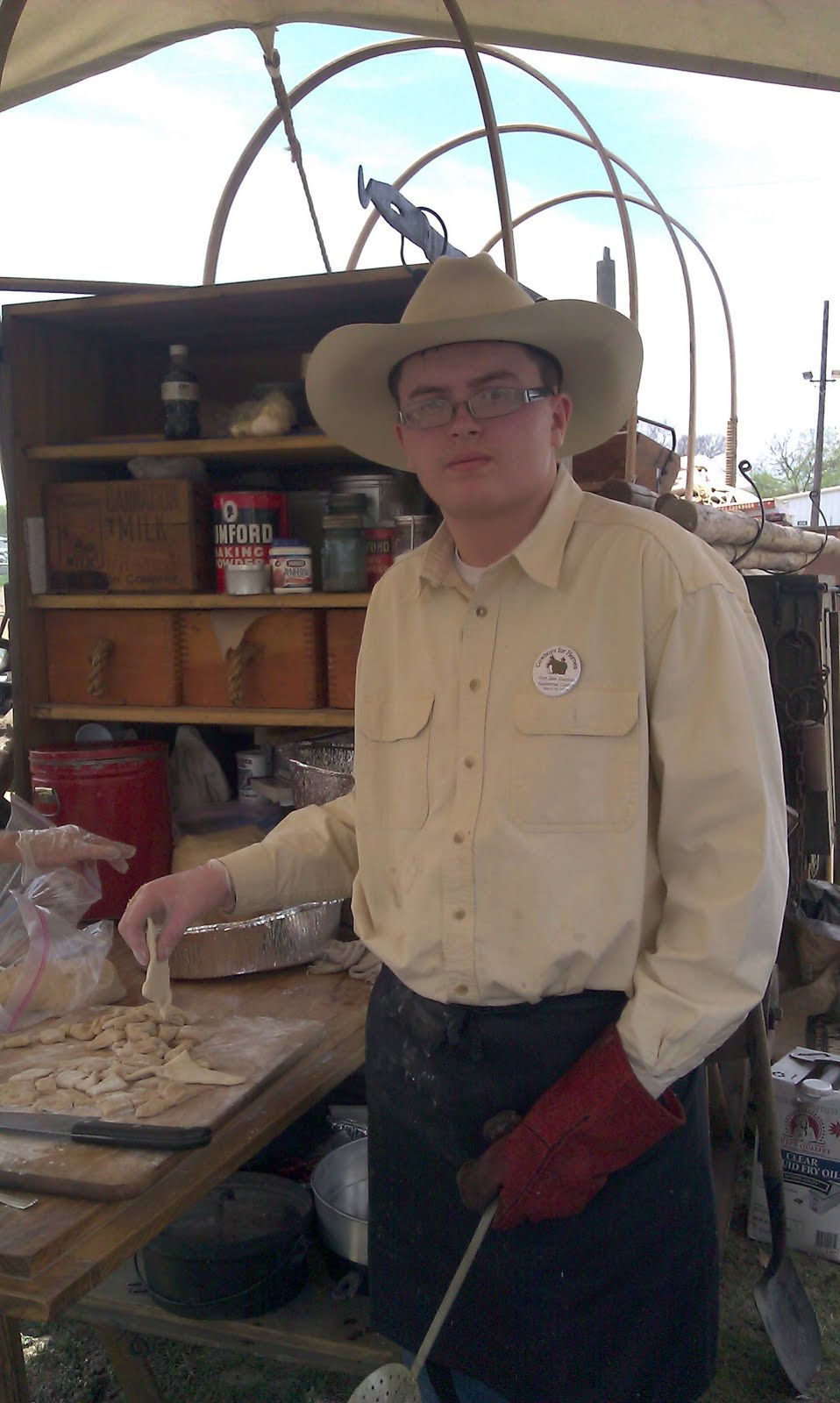 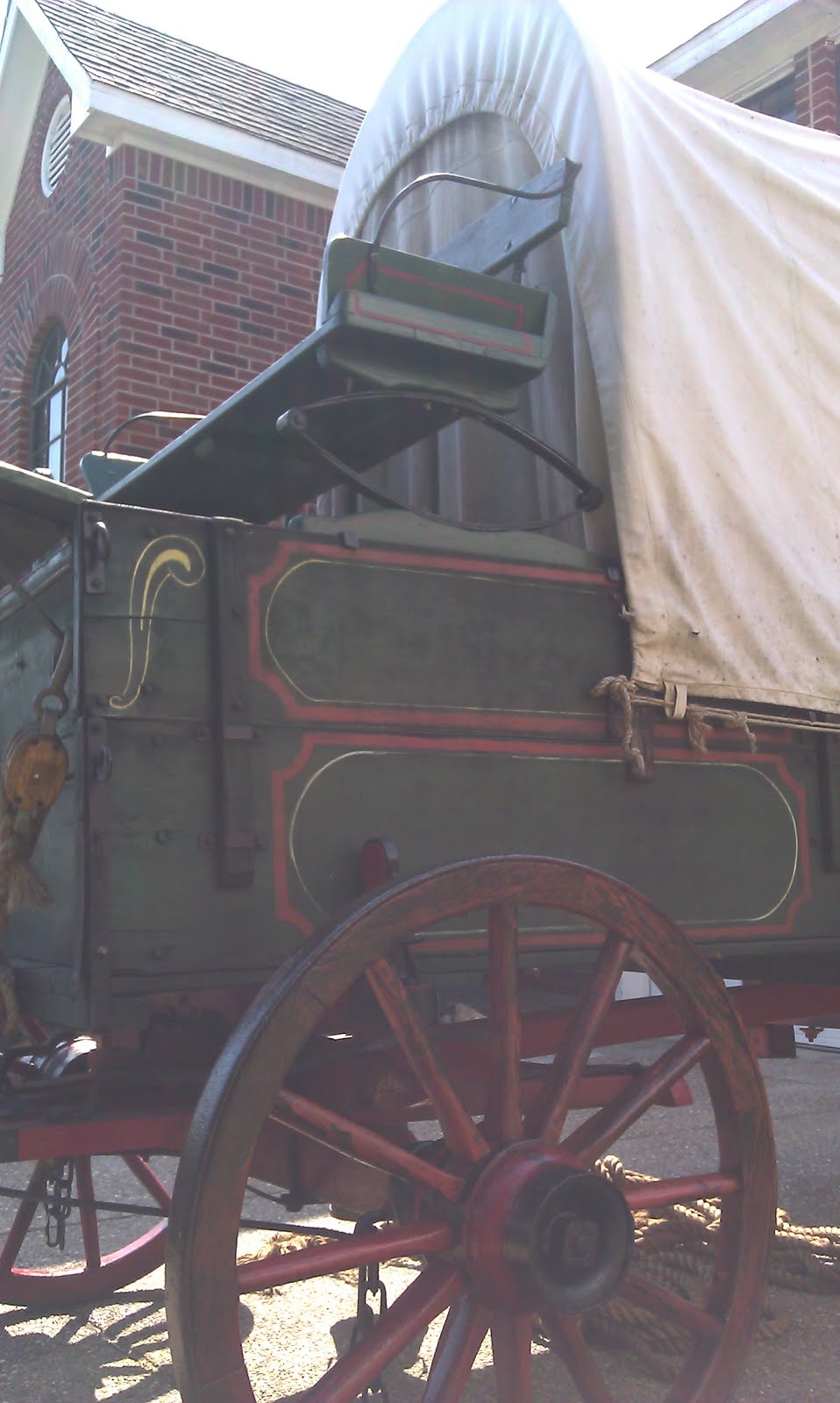 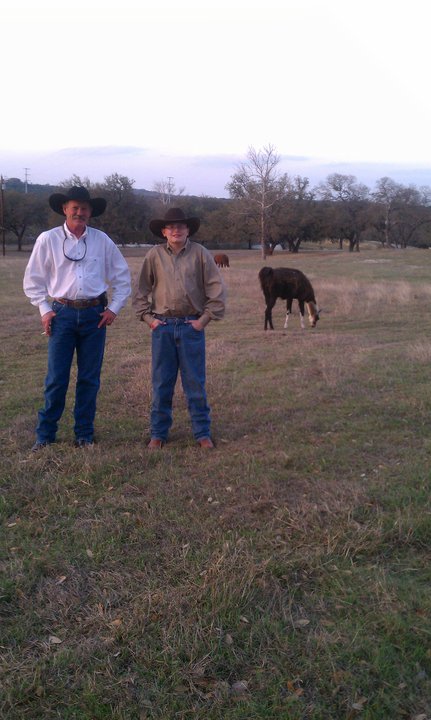